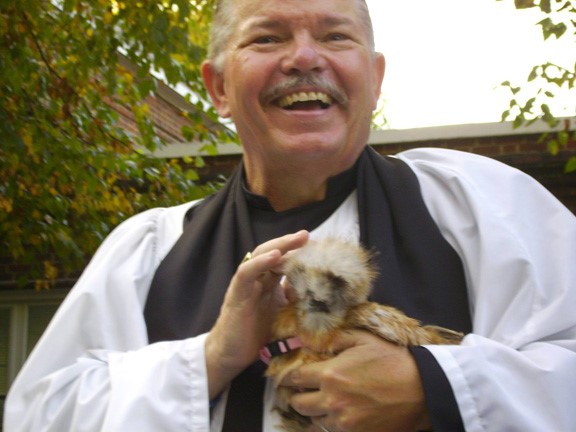 The Reverend Alan Kim Webster is a graduate of Lynchburg College with a BA Degree in Theatre and History. A diploma graduate of Lynchburg General Hospital School of Nursing and is currently licensed to practice as a Registered Nurse. He was called to ordained ministry in St. Paul’s Episcopal Church in Lynchburg, Virginia and is a proud graduate with a Masters of Divinity degree from Virginia Theological Seminary in Alexandria, Virginia. His ministry included service at Westminster Canterbury in Lynchburg, Virginia, Vicar at St. Peter’s Episcopal Church in Altavista, Virginia, and as rector of St. John’s Episcopal Church in Waynesboro, Virginia for the past 13 ½ years. He arrived in Charleston, West Virginia the second Sunday in January 2017. The Reverend Webster is married to the former Carol Jean Weidner since November 1980. They have two sons, Michael Sean Webster of Charlottesville, Virginia and Matthew Scott Webster of New Orleans, Louisiana. Father Kim loves to ride his motorcycle and relax with the family pet Jamie Lee Webster, a beautiful Bulldog.

Susan Ferguson, Parish Administrator, and her family have been members of St. Matthews for over 10 years. She and her husband Rob were married in 1999 and have one son Adam. She is a CPA and a graduate of Marshall University and the West Virginia College of Graduate Studies. Susan worked in accounting until her son Adam was born and was home full time for several fun filled years. Susan returned to work part-time and began in her most recent job as Parish Administrator in 2017.

Karen Morris, our organist, is a cum laude graduate of the University of Massachusetts, Amherst. She has been the organist at St. Matthew’s Episcopal Church since 1997. Currently, she is also the music teacher at Mountaineer Montessori School. Previously, she taught Kindermusik at St. Matthew’s, where her studio program received Maestro status, a distinction reserved for the top five percent of Kindermusik programs worldwide. She has also taught music at YMCA preschool and been the music clinician at several summer music camps, including Creative Capers and the Charleston Stage Company’s Summer Art’s Camp. She has accompanied many musical groups, including WomanSong Chorale and Mountain Laurel Ensemble. She is co-chair of the West Virginia Music Teachers Association-Charleston District and current treasurer of the Kanawha Chapter of the American Guild of Organists and often performs in AGO member recitals. Karen is most proud of her private piano and organ studio. Several of her students have received music awards and scholarships to attend summer workshops and college.

John Marshall has been the Director of the Adult Choir and Handbell Choirs at St. Matthews for the past twenty-two years. Before that, he was Director of Choirs at the First Presbyterian Church of South Charleston from 1975-1995. An honors graduate of Morris Harvey College (now the University of Charleston), John taught vocal music, band, and theatre for Kanawha County Schools before his retirement in 2013. He has been Musical Director and Orchestra Conductor for the Charleston Light Opera Guild since the 1980’s and has either performed in or musically directed over 100 productions for that organization. In 1998 John was the recipient of the Outstanding Individual Artist Award for the Mayor’s Award for the Arts, is a former nominee for the Governor’s Arts Award in 2014, and will be honored by his alma mater in the spring of 2017 with an Honorary Doctorate Degree in the Fine Arts.

Mickey Compton is from Birch River, Nicholas County. She attended school at Nicholas County High School and West Virginia State College. She has three daughters, Shamelle, Rebecca and Melissa Kelley, as well as six grandchildren and two great grandchildren. She ran a personal care home for thirty-two years and did child care for the state of West Virginia for six years. She has been at St. Matthew’s since 2013.

Kristina Claytor grew up in South Charleston. She attended school at South Charleston High School and is studying Graphic Design. She is receiving her Associate’s Degree at BridgeValley Community and Technical College, then plans to transfer and further her studies for her Bachelor’s Degree at one of the local institutes like Marshall University or WV State University. She is the granddaughter of fellow staff member, Mickey Compton, and helps her oversee the Nursery. In her free time, she enjoys photography, video editing, reading, and spending time with family.

Elizabeth Castle grew up in Charleston and at Saint Matthews. She attended UNC – Chapel Hill and graduated with a degree in Early Childhood Education. She taught elementary school in Atlanta, Georgia and Winston-Salem, North Carolina, before taking “early retirement” when her first child was born. Elizabeth married Jason Castle (at St. Matthews) in 1998 and they moved back to Charleston in 2007. They have three children: Mary Evans, Caroline, and Charlie. As the Director of Youth Ministry, she oversees programming for our middle and high school students. In her free time, Elizabeth enjoys volunteering at her children’s schools, traveling, and playing tennis.

Teresa Carmen Whitt, Director of Children’s Ministry, is a graduate of the Victoria University of Manchester, England, with a Master’s Degree in Art Gallery & Museum Studies, and the University of Kentucky with a Bachelor’s Degree in Art History. In addition to her work at Saint Matthews, she works in preschool, and is a Certified Educator in Early Childhood Education. Teresa was a Museum Director/Curator for ten years, including programming, public relations and exhibitions. She has also served as a City Chief of International Relations and the City’s Sister City International Committee. She has been a guest lecturer and speaker for numerous organizations and events.

Fred Garrett is the Sexton for St. Matthews.  He is a native of Charleston, WV, and is retired from Exxon Corporation.  He has been married to his wife Sue for fifty-three years, and they have three daughters and six grandchildren.  In his spare time, he likes fishing and camping with his family.